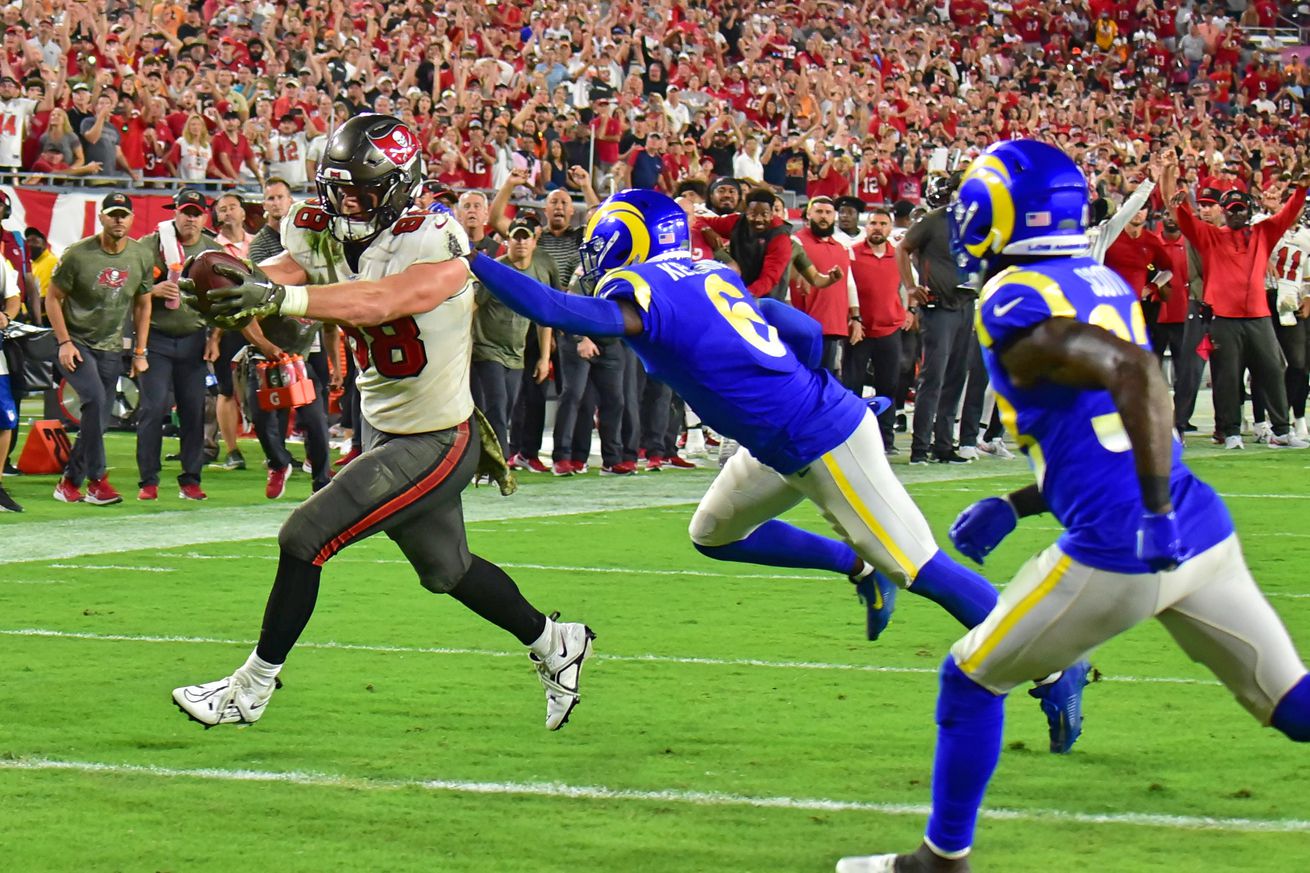 The Bucs are back in the win column thanks to the late game heroics of Tom Brady, Cade Otton

Well, that was intense. The Bucs decided to wait 59:51 into the game to score their only touchdown but it was enough to get them the win over the Los Angeles Rams and enough to get them back in first place in the NFC South ahead of their trip to Germany.

It was ugly at times, but there was plenty of good in this one. Let’s Pick Six.

1.) Relief. The look on Tom Brady’s face on the sideline following the touchdown pass to Cade Otton said it all. He looked like a man who had a 10,000 pound weight lifted off his shoulders as the Bucs finally got off their snide this season and got over the hump against the Rams. This is the second win this season against an opponent they’ve had trouble with over recent years and it’s this kind of grind it out, hard fought win that can propel a team to go on a run. The amount of players lining up to high-five or hug Brady after the Bucs took the lead with nine seconds left also spoke volumes. They trust their quarterback but they knew how bad he needed this win, maybe more-so than the rest of them did for a multitude of reasons. This could be the kind of game you look back on in four or five weeks and view as a catalyst for the Bucs stringing together some wins.

2.) Rough Day For Mike Evans. Evans starting things off taking a brutal shot to the ribs – reminiscent of Gronk against the Rams last season. He left the field for a few plays, returned, and immediately took another shot to the ribs. After that, he had some really bad drops on passes he normally catches. He looked somewhat trepidatious and reserved for much of the game, seeming more concerned with the contact coming than finishing the catch. Don’t get me wrong – I’m not taking shots at Evans by any means. That just appeared to be the reality of the situation. It speaks volumes that he went back out there and continued to play after the initial injury and that’s what leaders do. Just have to hope he’s feeling better next week and this rib injury isn’t what Gronk had to deal with last season.

3.) Defense Saves The Day. Outside of a 69-yard touchdown catch by Cooper Kupp – which appeared to be a miscommunication of some sort within the secondary – the defense did everything you could ask of them. Holding the Rams to barely over 200 yards of total offense, sacking Matthew Stafford four times, holding the Rams to 4-of-15 on third downs – this was a standout performance, especially without Sahq Barrett. Joe Tryon-Shoyinka played as well as we’ve seen him play all season, Vita Vea was the most disruptive defensive lineman on either side of the ball, then other players like Rakeem Nunez-Roches and Genard Avery brought pressure of their own. A much better performance from Devin White while Lavonte David summoned a vintage game then a secondary that held strong without Antoine Winfield Jr. It was a complete performance on the defensive side of the ball and something the Bucs desperately needed. Now, if they could just get a takeaway or two…

4.) Todd Bowles’ Best Decision Of The Season. I saw some frustration on Twitter about Bowles not challenging the spot of a Jake Camarda punt in the second half of the game. The punt appeared to hit about an inch short of the goal line and bounce straight up, pinning the Rams inside their own 2-yard line. The officials ruled it a touchback and the Rams got the ball at the 20. Now, the Rams would go on to lose a yard on the ensuing drive and punt the ball away. That said, not challenging was the right call and here’s why. That punt was beautiful, but it would have been really hard for officials to overturn that call and place the ball inside the 1-yard line. Maybe they win the challenge, but if they don’t – and we’ve seen some challenges that appeared obvious not go the right way – the Bucs lose a timeout. Had they lost the timeout, they lose this game. They needed those remaining timeouts to get the ball back from the Rams for what ended up being the game winning drive. If they didn’t have it, you’re looking at a Hail Mary situation at best rather than an incredible 60-yard drive in 35 seconds. It’s moments like that where you look back and realize, in the moment, the right choice was made.

5.) Fourth Quarter Heroes. Cade Otton and Scotty Miller both deserve game balls for their performances. Yes, Miller had the dropped touchdown the possession before, but what a fourth quarter he had. Miller and Otton were the targets of choice down the stretch – combining for four of Brady’s five completions on the game winning drive and 56 of the 60 yards the Bucs gained. In fact, the two of them were the top two receivers in the game with Otton finishing the game with five receptions on six targets for 68 yards and the touchdown and Miller getting seven receptions for 53 yards on eight targets. An absolutely stellar day from both of them.

6.) All-Aboard The Rachaad Express. I said it last week, I’ll say it again this week – the run game is more effective when Rachaad White is lined up in the backfield. It was said on the television broadcast that Fournette was upset on the sideline during a “Rachaad drive” because he wanted to be on the field. White went to him and said the team needed him and Fournette snapped out of it – but as Tony Romo said, this is a results business. Fournette had 2.1 yards per carry while White had 3.4. On first down runs, White had rushes of four, seven, six, five, and four. That’s an average of 5.2 yards per carry on first down. I don’t know what else anyone needs to see from him, but those are the kinds of results the Bucs are looking for when they call for those first down run plays – and White is so explosive that he’s going to break one of those off for a huge gain or a house call. Give the rookie more touches. Good things will happen.

10 – Total yards by the Bucs in the third quarter

By the way this was the same crew that officiated last week’s Carolina-Atlanta game. They called the penalty on DJ Moore last week for taking his helmet off but didn’t call it on Jalen Ramsey this week???? https://t.co/I1TnlCCwG2

Tom Brady and the Bucs pic.twitter.com/Zv8Z0fSQe8

3.) Minnesota Vikings – Game winning drive in FedEx for Kirk Cousins. You like that!

4.) Kansas City Chiefs – Wait til Kadarius Toney gets more acclimated to the offense

5.) Miami Dolphins – Tua has the offense humming and what an addition with Bradley Chubb

(Off to Germany the Bucs go)