Primetime is not the Bucs’ time as Ravens win 27-22: Week 8 game recap 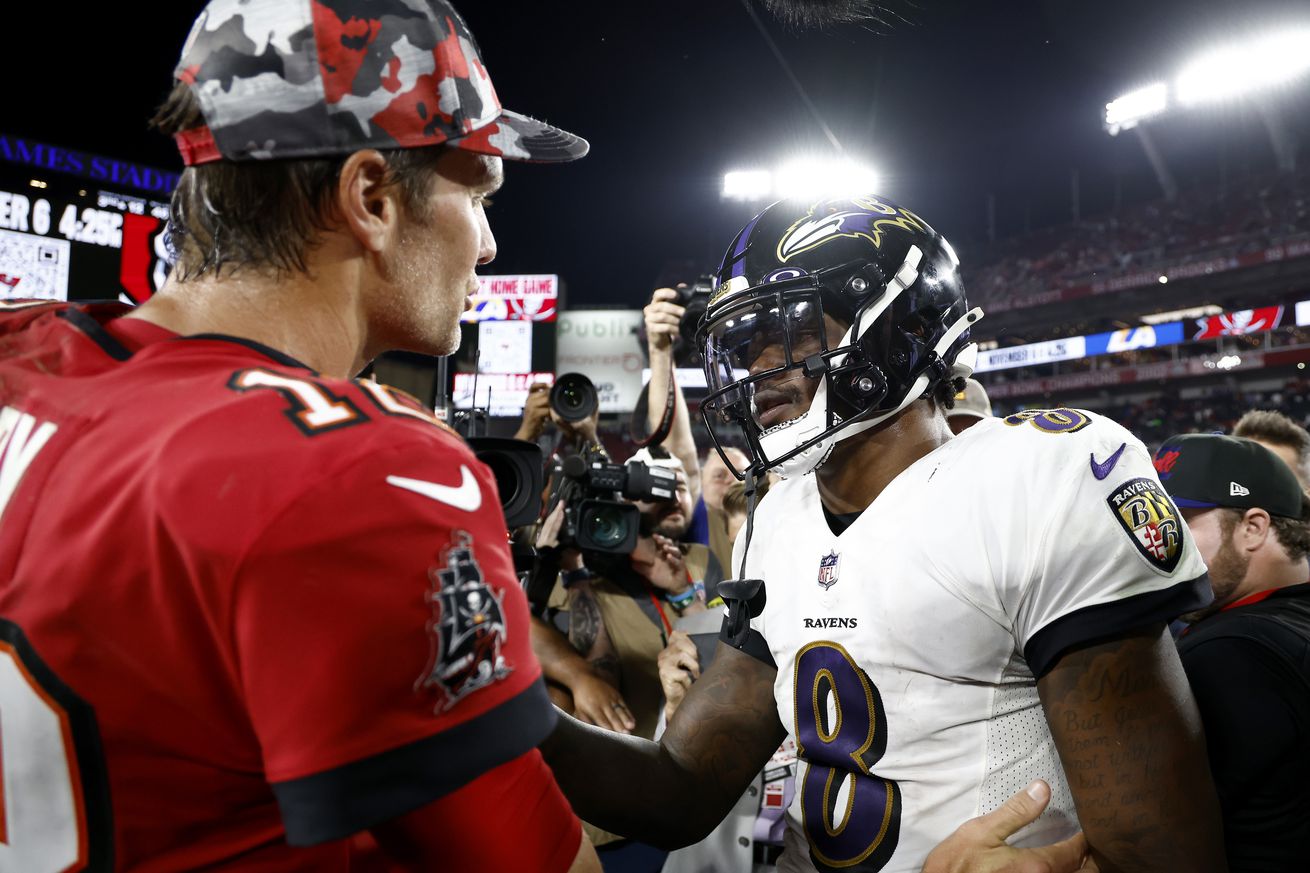 Tampa Bay continues down a long dark road into despair, at 3-5 the Bucs continue to grind out losses.

The Tampa Bay Bucs are in trouble. When they lost to a one win Pittsburgh Steelers team there was shock, when they followed that up with a loss to a one win Carolina Panthers team there was concern, now they have lost a third straight and that does not come as a surprising reveal, which means trouble. It may feel like a distant memory but it was not that long ago that Tampa Bay was perennially considered a favorite to win every week. Tom Brady led an offense that featured an explosive passing attack and a solid run game, which was able to put up points on anyone. The current reality, the only reason this season is not already over for Tampa is because they are in the NFC South. The weakest division in the NFL, currently, has given the Bucs a cushion to land on in their fall from grace. Thursday night Tampa Bay took on the Ravens, a victory would have ensured that they would maintain their first place standing and maintain a seed in the playoff picture. Tampa came out with a loss and more questions.

As is true any time the Bucs suit up on game day there are certain expectations of the team and their players. The reality has the potential to line up with expectations, but it can also be quite different, here’s:

The Bucs kickers- Tampa Bay has had a rocky season on offense to this point and that means that fans have had many opportunities to watch the teams’ kickers kick. Whether it be Jake Camarda sending possession back to the other team after a three-and-out or Ryan Succop kicking a short field goal after the Bucs offense was unable to finish a promising drive in the red zone, the 2022 Tampa Bay Bucs have featured a lot of kicks. For the most part those kicks have gone well for all parties involved, The team’s rookie punter, Jake Camarda, has proven to be a solid piece for the special teams unit moving forward, replacing the veteran Bradley Pinion. Ryan Succop has been arguably the team’s most reliable all around player. On a team full of players who have been inconsistent and Ryan Succop has been the antithesis of inconsistent. The Bucs kicker has missed a mere one kick, all the way back in week one against the Dallas Cowboys, a game in which he did make four other kicks.

Julio Jones- Julio Jones has played very sparingly this season due to numerous injuries. Jones, missing more games than he’s played, did have a huge impact when he was on the field in week one where he averaged a sensational 23 yards a catch. Julio Jones has been largely a disappointment, and the perception of his season will not be any different after this game, as he was what he has been, largely a disappointment against the Ravens.

The Tampa Bay Bucs’ run game- Tampa Bay has struggled to run the football all season with the exception of week one. Leonard Fournette has not had a 100 yard rushing day since that opening game of the season, and after tonight that remains the case. Fournette did score a first quarter touchdown to pump some life into the stadium but he had very minimal contribution to the game after that. The Bucs netted 44 total yards rushing, a yard of which was supplied by the team’s 45 year old quarterback.

Tampa Bay’s opening drive offense- Teams’ first offensive drives are composed of scripted plays and Tampa has not been working off a good script so far this season. Tampa Bay had not scored a first quarter touchdown all season, until tonight. Tampa’s offense came out and marched right down the field with a nicely blended mix of run and pass. The offense looked like a Tom Brady Buccaneer offense of old. Tampa had an all around productive first quarter, they finished with their most points and yards in any opening quarter this season. Unfortunately for the Bucs that was the only points they would put up in the entire first half.

Tampa Bay’s pass rush (w/ Shaq Barrett)- This is a classic stats don’t tell the whole story moment. The Bucs finished with three sacks, but the pass rush was a nagging thorn in Lamar Jackson’s side until – The Shaq Barrett injury. Bucs pass rushers spent the better part of the night chasing Lamar Jackson all over the field. They chased him backwards, backwards and then further backwards. Tampa’s first half pass rush came to life, only to be put back down by the news that Shaq Barrett would not be returning to the game.

The Bucs’ willingness to throw down the field- There have been many gripes with Tampa’s offense from play calling, to offensive line play, and everything in between. One of the frustrations, most common amongst fans, has been the lack of downfield passing attempts. Bucs fans can’t carry that complaint with them to work tomorrow. Tom Brady and the Bucs stretched the field vertically like Bruce Arians was buzzing in calling plays from the team suite. Deep balls rained out of the Tampa night sky. Brady to Evans, Brady to Scotty, sweet, sweet, deep shots.

Pat O’Connor- In what was easily the most shocking play of the night, long-time Bucs backup defensive linemen, Pat O’Connor managed to get his hand on a ball. A ball off the foot of hall of fame bound kicker Justin Tucker. Most of those watching the game, no doubt expected Justin Tucker, no matter the distance to sink his kick right through the uprights. Following Tucker’s pregame kick attempts of 70 yards going through the goalposts, Tucker put toe to leather and leather met palm. O’Connor also logged more defensive snaps than usual and had an assisted tackle.

Tampa Bay’s fall has been a far one, at this point, with a tough upcoming schedule, losses are becoming more and more expected. The bar is rapidly being set lower and lower, the Bucs haven’t been able to run the ball in weeks and there has been no light at the end of this tunnel. The Bucs now have the benefit of a mini bye week to potentially self-scout and make some necessary corrections before their revenge game next week, against the Rams.