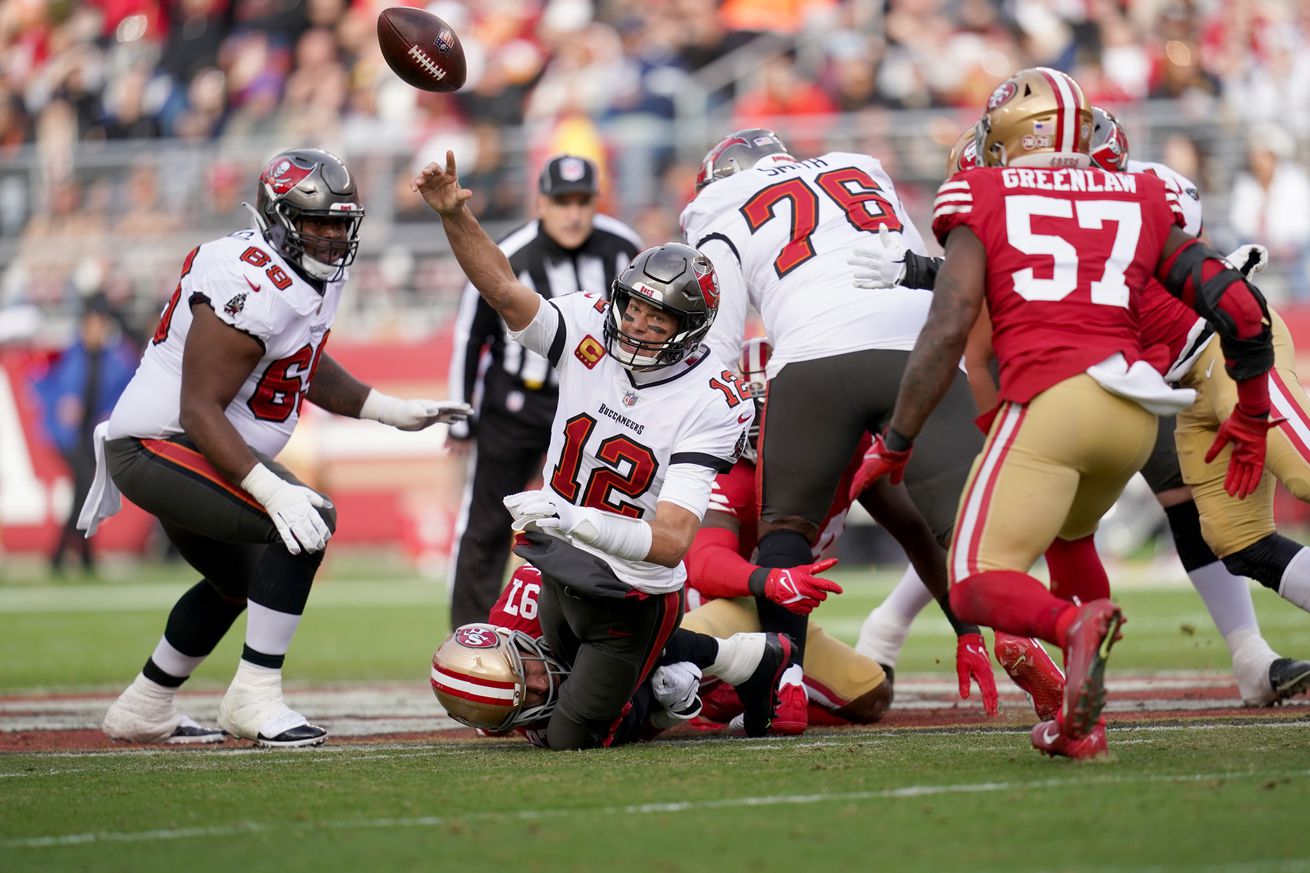 The miners dig past pirates in Cali clash

On the heels of one of the most exciting wins of Tampa Bay’s season, the Bucs flew cross-country to play Brock Purdy and the San Francisco 49ers. Just a few weeks ago, Tampa Bay looked to be struggling just to find a way to win their division and limp into a home playoff game as the fourth seed. Now just a few weeks later, Tom Brady’s late game theatrics in unison with an injury to 49ers’ quarterback Jimmy Garoppolo have people feeding into the idea that all of a sudden this 2022 Tampa Bay Buccaneer team that has been largely a disappointed throughout the season may actually be playing a head to head game in which a win could potentially net them an opportunity at the third seed.

When the Bucs are playing football certain things are expected. Sometimes reality syncs up with those expectations, other times the reality is something else entirely, here’s:

Kyle Shanahan- Today’s game was a shining example of good coaching. None of it was on the Tampa Bay Bucs’ sideline. Kyle Shanahan versus Todd Bowles was, on paper, a matchup of great on great and Todd Bowles was outclassed. Left completely dead in the water by a coach, without his starting, or number two quarterback. Todd Bowles had a very good opportunity to show his worth today and unfortunately for Bucs fans perhaps he did.

Donovan Smith- Donovan Smith may be overdue for his placement in this category by a few weeks, but he certainly earned the right to be here this week. It is possible that there is no one individual play that deflated the Bucs more than Donovan Smith’s holding penalty early in the game. Donovan Smith not only took away a touchdown that would have tied the game but he also took away the first signs of life Mike Evans has shown in weeks. Donovan Smith has been highly criticized at different points in his Bucs career, but he has also been a dependable player for the organization at other times. At this juncture, he has reverted back, resembling something closer to the player he was during his most heavily criticized points.

The Bucs defensive awareness- The Bucs are a good, not great, defensive team. One area that is and has always been a sour note is the team’s awareness and attention to details. The defense has had a propensity to struggle against offenses with some elements of ‘razzle dazzle’ and Kyle Shannon’s offense embodies those elements as much as any. Far too often when facing teams who are unconventional in their play designs or approach the Bucs defenders have a very difficult time finding the ball and consistently being in the correct position.

Todd Bowles- Decision making is not what Todd Bowles does best. We know that and we accept that. The Bucs have won six games this year, in spite of that. Following an impressive opening offensive drive, by 2022 Tampa Bay standards, Todd Bowles decided to trot Ryan Succop out for a 55 yard field goal attempt. The Bucs have a good kicker, a very good kicker, Succop’s style is accuracy, not leg strength. Further adding to the odd nature of Todd Bowles’ decision, on the broadcast Fox’s announcers revealed the longest field goal that Ryan Succop had made in pregame warmups was just 51 yards. This is a simple but prudent example of putting your players in positions to fail, the exact opposite of what a good coach is known for doing.

Mike Evans- Mike Evans is a millionaire, with a potential Hall of Fame resume. He has set the NFL record for consecutive thousand yard seasons to start a career, with the most touchdowns in Tampa Bay Bucs history and somehow all I feel is bad for him. Evans is not the best receiver in the NFL by any measure but he is the best wide receiver on Tampa’s roster and the fact the Bucs, whether it be Byron Leftwich or Tom Brady, just refuse to throw him the ball is confounding. There is no reason the Bucs should have game after game where their elite, number one receiver, gets less reps than his peers who are lesser tier players. With zero disrespect intended to players like Leonard Fournette, Chris Godwin, Rachaad White, etc. they should not continue to see more reps each week then future Ring of Honor member Mike Evans. To Evans’ credit, he remains calm and poise, never losing his temper or composure the way other receivers of his ilk have been known to do.

N/A (Check back next week)

There are only 17 games in a season so every game you play is inherently important, however, not all are equally as important. While a loss in San Francisco isn’t ideal, the defeat doesn’t leave the same stomach churning pain as a loss in-division would carry. The Bucs are still the NFC South leaders and the favorites to host a playoff game. This game was… Terrible, but the season still doesn’t have to be. Next week the Cincinnati Bengals will head down to Tampa for what will likely be another tough matchup for Tampa Bay.