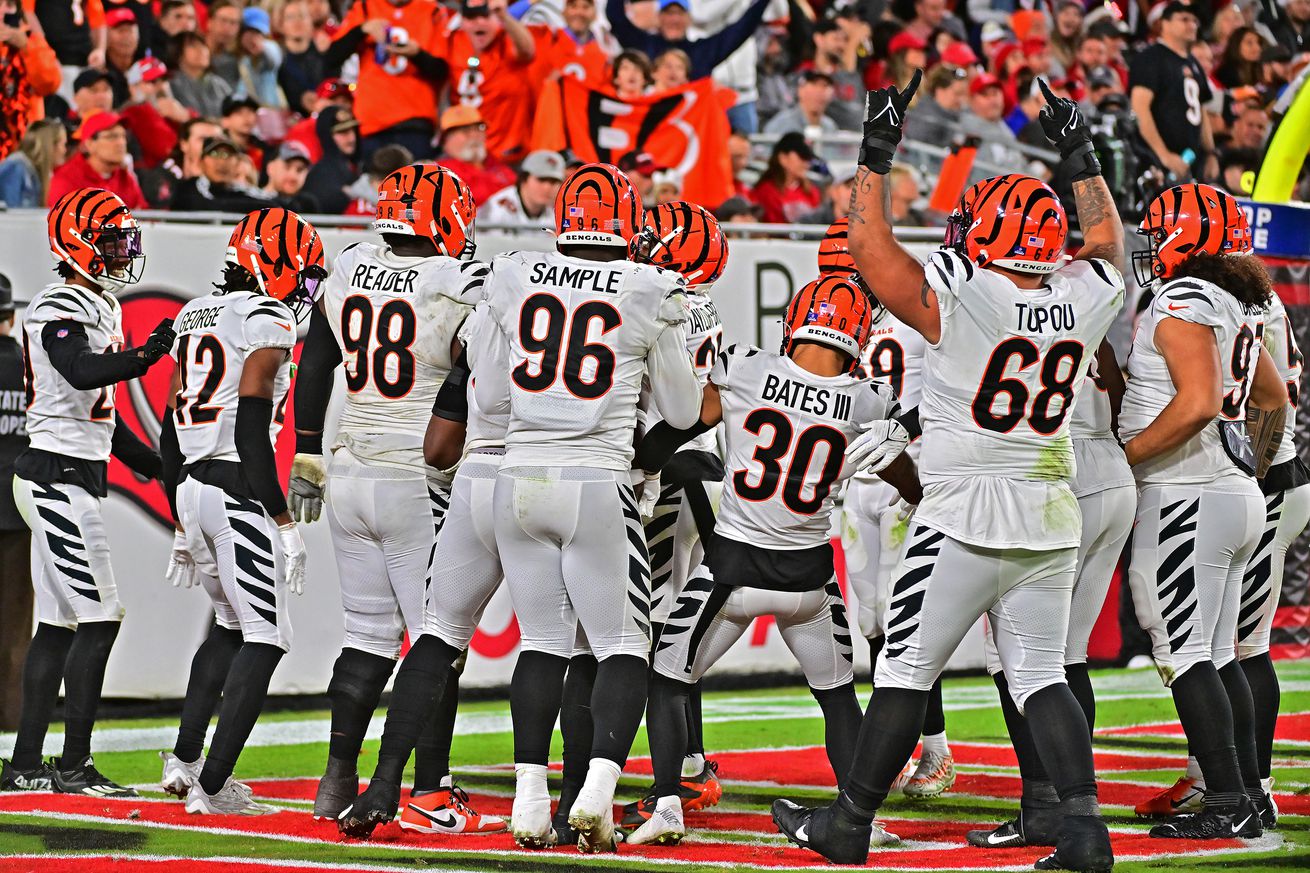 In the first half of Sunday’s game, the Tampa Bay Bucs looked like the team that most people thought they could be coming into the 2022 season. In the second half, the Bucs played like the team that has bumbled through 15 weeks of the 2022 season. After dominating the first half, and leading the Cincinnati Bengals 17-3, the Bucs completely collapsed. Cincinnati rolled in the second half, outscoring the Bucs 31-6, in route to a 34-23 victory on Sunday at Raymond James Stadium.

The Bucs played their best football of the season in a dominating first half performance. The offense scored on three of their four drives and possessed the ball for 20 minutes and 27 seconds, while the defense held Cincinnati to three points, and forced three “three-and-outs.” Unfortunately, the Bucs offense, and special teams, played horrendously in the second half, continuously putting the defense in precarious situations. The defense could not bail out the team on this night and allowed the Bengals to score four second-half touchdowns.

Tampa Bay’s collapse began after a failed fake punt attempt from their own 26-yard line. The play looked like many other discombobulated concoctions that have plagued the Bucs all season. Running back Giovani Bernard didn’t seem to be on the same page as everyone else, and had the direct snap bounce off his hands, which was eventually recovered by the Bengals. From that moment on, the Bengals completely dominated the contest.

Tampa’s defense played well throughout the evening, holding the Bengals to 237 total yards, and 53 yards rushing. Carlton Davis had an interception on the opening drive, after Keanu Neal tipped the ball into the air. Lavonte David added a sack, and Joe Tryon-Shoyinka and Anthony Nelson combined on a first half sack of Joe Burrow. But the momentum created in the first half was not carried over to the second, as the defense did not record a sack, or a turnover.

David led the Bucs with eight total tackles, while his fellow inside linebacker, Devon White tallied seven total tackles. Davis played a great game for the Bucs, recording six total tackles, four passes defended, and had the one interception. Safeties Mike Edwards, and Logan Ryan each contributed with five total tackles a piece. The defense was not to blame for the loss on Sunday and deserved a better outcome than the final score indicated.

The main reason the Bucs lost on Sunday was quarterback Tom Brady’s four turnovers. Brady looked every bit a Hall-of-Famer in the first half, throwing for 194 yards and two touchdowns. The offense moved the ball extremely well, using play action, and pre-snap motions, to uncover what defense the Bengals were in, and give Brady the extra time needed to complete passes downfield. For some reason, that all changed in the second half.

The Bucs second half possessions resulted in a loss of downs (fake punt), an interception, a fumble, another fumble, another interception, a punt, and a garbage time touchdown. As the play action passes, and pre-snap motions disappeared, so did the time Brady had in the pocket. He was pressured on over 30% of his drop backs and committed a fumble while he was being sacked. He was hit while releasing the ball for his second interception, and simply lost grip of the ball while handing it off to Leonard Fournette for his second fumble.

Brady did complete 30 out of 44 passes for 312 yards and had three passing touchdowns on Sunday. He looked sharp, and in rhythm when given enough time in the pocket. The offense also executed much better when they were running the ball in the first half. Rachaad White, and Leonard Fournette combined for 67 yards rushing, on 15 attempts in the first two quarters. But they only ran for 25 yards, on 10 attempts in the second half. Total reliance on Tom Brady is not a winning formula for this team and cost them this game.

Tampa Bay looked like a Super Bowl contender in the first half on Sunday. And then the fake punt happened. I don’t know if it was called in the huddle, or it was an automatic audible based on formation, but that play singlehandedly changed the direction of this game. The Bucs continue to beat the Bucs with bad decisions. bad plays, and bad penalties. Amazingly, they are still in first place, and can realistically win the division, and host a playoff game. To say the 2022 NFL season has been strange, is the understatement of the century.

The journey continues next week in Arizona, as the Bucs battle the Arizona Cardinals on Christmas night. Let’s hope for a victory in our stockings, and not a lump of coal.