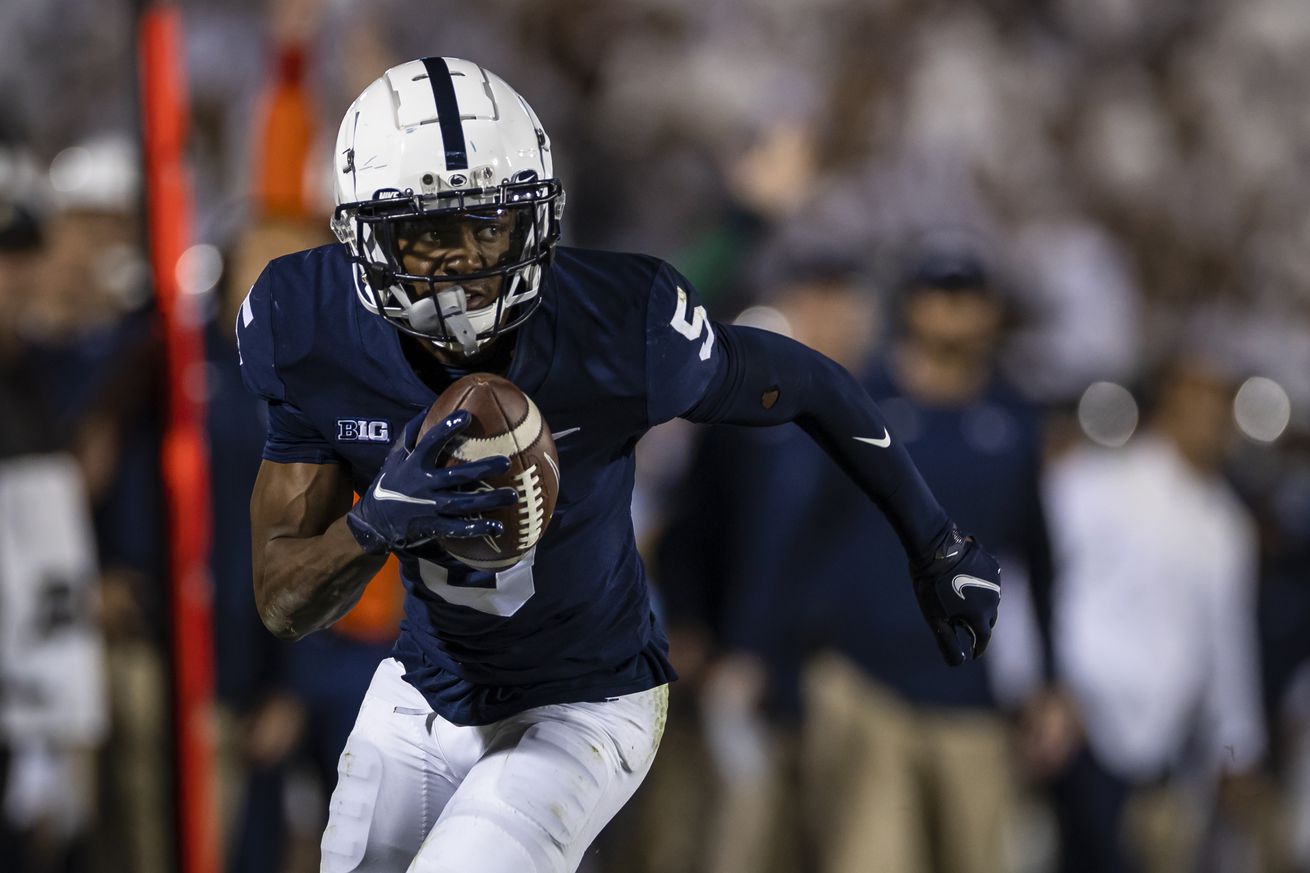 Even with a stacked receiver room, the Bucs could still look to add more weapons

Entering the 2021 season, the Bucs wide receiver room was viewed by many as one of the best in the NFL. Fast forward a few months and the Bucs were sent home in the divisional round partially because they did not have enough weapons on offense to get the job done.

Chris Godwin suffered a torn ACL, Antonio Brown did Antonio Brown things and all of the sudden a position that was considered a major strength of this team turned into a gaping hole.

This offseason, the Bucs locked up Chris Godwin with a brand new contract, brought back Breshad Perriman and added Russell Gage through free agency, but is that enough? With Godwin’s status for the beginning of the season up in the air, the Bucs could very well look to draft someone to be an explosive piece in the offense and Penn State receiver Jahan Dotson could fit the bill.

Dotson was a 4-star recruit from Pennsylvania when he decided to stay local and go to Penn State to play for the Nittany Lions for the next 4 seasons.

While at Penn State, he would increase his production every season and in 2020 became one of the most important pieces in Penn State’s offense. In his final 2 seasons, he sometimes suffered from inconsistent quarterback play, but still managed to be productive, racking up over 800 receiving yards and 8 receiving touchdowns in 2020.

In 2021, Dotson was even better and established himself as the top receiving option for PSU. He caught 91 passes for 1,182 yards while also catching 12 touchdowns. Dotson was a big play and reliable threat for Penn State and will look to continue that in the NFL.

At his pro day, Dotson decided not to run the 40 yard dash or participate in the vertical or broad jump, but he did end up doing the bench press, doing 15 reps before he went to the on field workouts portion, where Dotson ran crisp routes and did not drop a single pass during the workout.

Dotson would be able to come in and make an impact for the Bucs from day 1, but it may not be as big as some would hope but that is not a knock on him, it just speaks to the depth they have.

Even though Godwin will be able to play in 2022, there is no guarantee that he will be ready for the first few weeks of the season, which would mean the Bucs top two receivers would likely be Mike Evans and Russell Gage, which is solid but after that there is a drop off. Drafting Dotson would allow the team to have much better depth and another explosive option for Tom Brady.

Some may not believe the Bucs need to draft a receiver in round 1, but the more ways and options a team has to create offense is better, especially in today’s NFL. Dotson could be the 4th receiver on the depth chart once Godwin is back, but it would make depth in the receiver room very good.

This where things could get interesting because both Chris Godwin and Russell Gage signed 3 year deals each this offseason and Mike Evans also has another 2 seasons on his contract, so what role could Dotson have 3 years from now? It could be similar to the one he will have in 2022 but could also be a major piece in the offense.

Does drafting Dotson change the Bucs’ plans when it comes to the future of Mike Evans and/or Chris Godwin and Russell Gage? If Dotson were to be drafted in round 1, he would have a 4 year contract with a 5th year option, so it could give the Bucs a cheap productive option 3 years down the line if they chose to move on from any of the 3 players already on the team, regardless of who else is in the receiver room at that time.

Doton’s stock has consistently been in the later 1st/early 2nd round and that has seemingly not changed. The Draft Network has given Dotson a consensus 2nd round grade and most of their analysts have ranged from a low end 1st round talent to a high end 2nd round talent. The Bucs sitting at 27th overall could definitely be in Dotson’s range if they chose to add a receiver.

Tampa Bay could also look to trade back if they wanted to gain an extra pick or two and still be able to land Dotson later in the 1st or with one of the first selections on day two.

Alright, the time is now to play GM and make the pick. Should the Bucs take a look at the Penn State product or should they use their resources elsewhere? If Dotson is available at 27 in the NFL Draft, are you making the selection?