Yarcho’s Pick Six: Snatching Victory From The Jaws Of Defeat 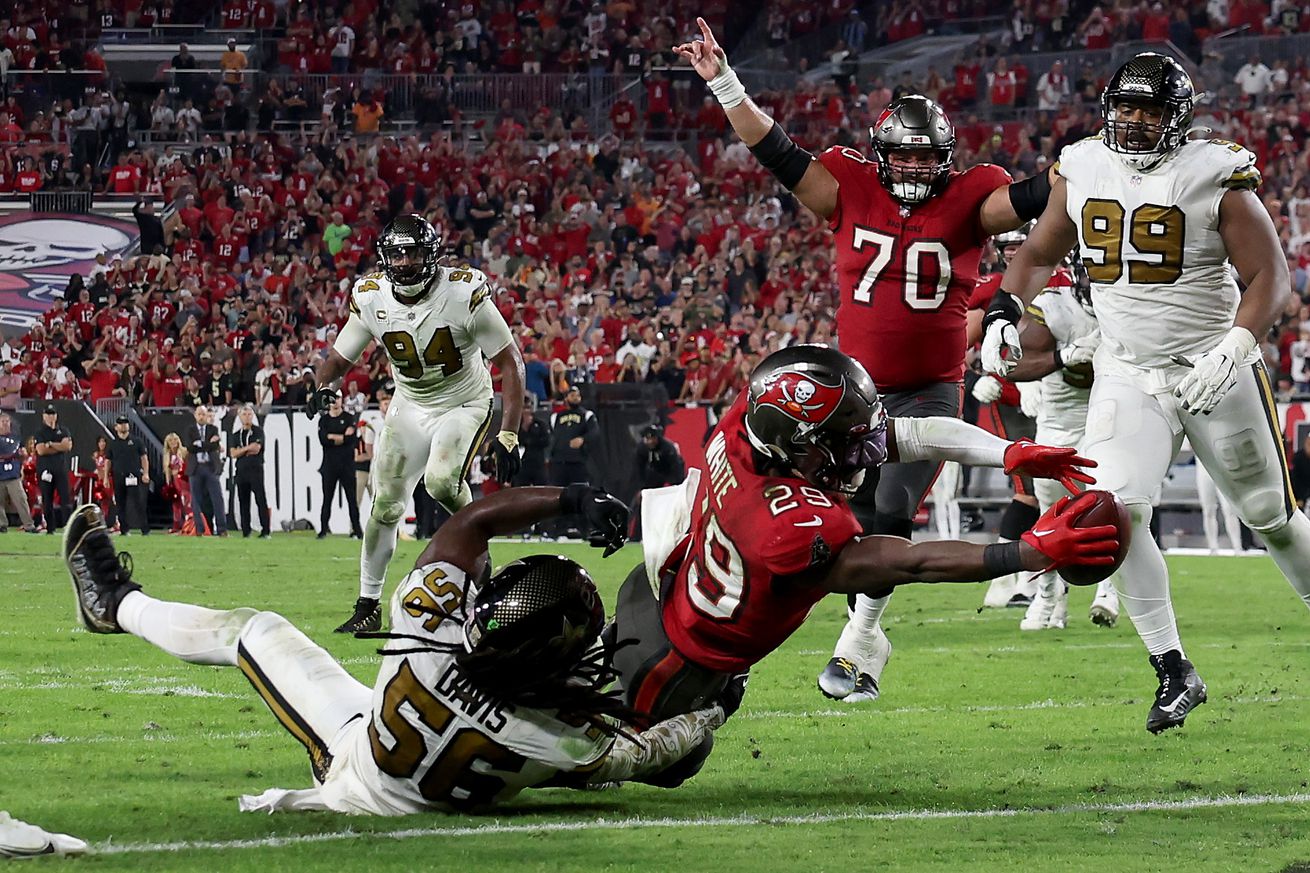 An improbable comeback victory gets the Bucs back to 6-6

It’s okay – you can breathe now. As anemic as the Bucs’ offense looked (yet again), the New Orleans Saints couldn’t put the game away – leaving the door open for Tom Brady to do Tom Brady things.

1.) Rookies Save The Day. It was Cade Otton making key catches on the first touchdown drive, which he also got. Then it was Rachaad White fighting through a Demario Davis tackle to stretch into the end zone to tie the game with three seconds left. Together, the two rookies combined for 97 yards and two touchdowns and might have rejuvenated the Bucs while saving their season in the process. Brady continues to show his trust and belief in the two young playmakers and they’re rewarding his trust with big contributions to the team. Both have two touchdowns on the season and both now have game winners on their resumes. The more the Bucs involve them, the better it will be.

2.) Hats Off To The Defense. The defense gave up some big plays and had a few rough drives, but once again they kept the Bucs in the game and when it mattered most, gave the offense a chance to do exactly what they did – win the game. Yes, they were aided by Mark Ingram running out of bounds a yard short of the marker with six minutes left in the game – a decision that proved costly, though Ingram’s injury probably played a large part in that play – but the defense was on the field for what felt like most of the second half. However, they still found a way to dig deep and get important stops down the stretch. Twice, the defense held the Saints to field goals inside the ten yard line and those proved to be the difference in the game. And they did this without three starters in their secondary.

3.) Remove The Rose Colored Glasses. All is not fixed in Buc Land. The offensive play calling is still, well, offensive. Run on first down, wide receiver screen, dump off, punt. It’s the same thing over and over and over again. Yet, with five minutes left and the Bucs go into hurry up mode, Scotty Miller gets involved. Cade Otton gets involved. Julio Jones does vintage Julio things. The offense just clips along like we expect them to all game long. Byron Leftwich is still calling predictable, conservative games and hindering the offense’s ability to put points on the board. And not getting Mike Evans involved until under the two minute warning in the first half – with Marshon Lattimore standing in street clothes on the sideline – is absolutely inexcusable. The win is nice, but they’ve done the same thing every game this year and expect it to all of a sudden work. Isn’t that the definition of insanity?

4.) Tommy Terrific. Was he terrific the whole game? Absolutely not. However, he got the opportunity to do what he should have been allowed to do last week – unload and go for broke. And he did it two drives in a row. The passes on those two scoring drives were crisp, perfect placement, and looked effortless. He looked like he could do this for another decade. On the final two drives, Brady went 14-for-19 with 118 yards and two touchdowns. Mind you, it took eleven quarters and twelve minutes for Brady to get his first home touchdown against the Saints since signing to be the Bucs’ quarterback – but thank goodness we didn’t have to wait that long for the second one.

5.) Donovan Smith. Yikes, Donovan. He had a rough game to say the least and his holding penalty with 19 seconds left took a Chris Godwin touchdown off the board and could have cost the Bucs the game. In the last two drives, Smith had two holding penalties. For someone who played as well as he did the last two seasons, Smith is having one of his worst years this year. You wonder how much the injury is playing into his recent issues considering it’s a pain management issue – and going up against some of the premiere pass rushers in the NFL with one elbow is going to lead to some technique breakdowns. Then, you also wonder how much he misses Ali Marpet next to him. There’s no question the elite level of the offensive line last season can be equated to the overall sum of the parts. Now, Smith is half of the actual starting five left standing and the Bucs hope to play long enough this season to see two more return. In the meantime, the Bucs have to figure out a way to give Smith a little more help and avoid some of these costly penalties.

6.) Lavonte David Is Still That Dude. Lavonte looked like a man on a mission Monday night and finished as the team’s leading tackler by a wide margin. He was shutting down Alvin Kamara, stopping Mark Ingram dead in his tracks, and even sacked Andy Dalton early in the game for just his second sack of the season. It’s truly amazing that David still gets overlooked for accolades and awards when he’s been, hands down, one of the best and most consistent linebackers in the NFL for the last decade.

32 – Holding penalties by Donovan Smith since 2015, most in the NFL over that span

All of us rn pic.twitter.com/khfBmzorNr

1.) Buffalo Bills – Back in first and no one wants to go to their house in January

3.) Minnesota Vikings – It doesn’t feel like this team is real, but they keep finding ways to win

4.) Kansas City Chiefs – One of the most dangerous teams in the league against anyone that isn’t Cincinnati

5.) Cincinnati Bengals – After an 0-2 start, this team looks electric on both sides of the ball

The Goat Just Did It Again